Attending a football game I met two characters. Entrepreneurs we will call them. They pitched their creative (to say the least) concept to me. Humored, I played along. Discussion ensued about the product (a type of clothing), target market (males age 18-35) and revenue projections (Y1 = $11m).

When they learned I was an attorney, I was hired as general counsel (note to current employer: I am not seeking a new job. This entire conversation was in jest.) As we continued discussing their idea (which can’t be disclosed here, but I assure you it would make a great SNL commercial and apparently improve the lives of many male college students), I shared that I had doubled in Political Science and Marketing.

“Interesting combination,” Character #2 remarked, “which do you prefer: law or marketing?”

“Marketing!” I exclaimed. “Law school was the safe option.”

Since my heart is with marketing, when I saw this book, Contagious: Why Things Catch On, I had to pick it up. 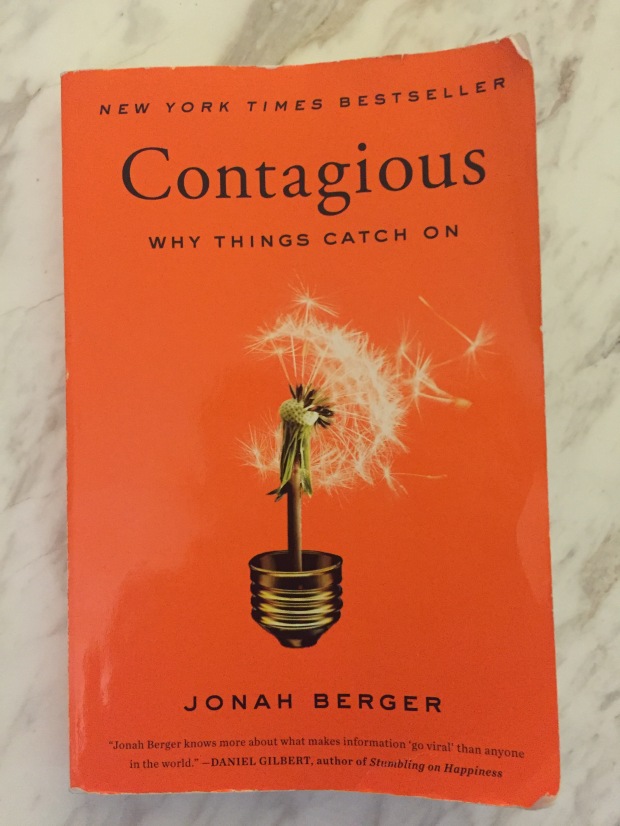 One business school friend who majored in the more respected business major, Finance, believed we colored in the marketing classrooms. While the rumor about coloring is not true, we did discuss how colors effect mood and buying habits.

Marketing is the business world’s take on psychology. It is the intersection of human decision-making and product / service / idea proliferation. I happen to be interested in both.

The books begins with Social Currency. It highlights a study that reveals that the same brain centers that respond to rewards like food and money are activated when we share our personal opinions. Case and point: me, right here, hitting those reward centers by sharing my opinion about this book!

Other salient points: a good trigger is more important than a good slogan. Emotions that evoke high levels of physiological arousal, emotional or physical, are the most powerful.

Practical Value underscores the psychology of deals to the extent that we do not evaluate decisions in relative terms. Here, Berger highlights Daniel Kahneman’s work which made Kahneman the first non-economist awarded the Nobel Peace Prize in Economics.

By far, my favorite principle was Public (so much that I referenced it in another post). It focuses on imitation and social proof.

On its surface, this seems like the most obvious principle. The more people that like a restaurant, the more other people are likely to go. Big Red Truck. But imitation is so strong, it drives 1 in 10 kidney donations to be refused that would have been a match!

He also highlights the Power of Observability. For imitation to happen, people must see it. This gets trickier with charitable giving. Often a private act and further complicated by our social tendency to frown upon people talking about their own acts of charity (but if it means it will inspire others – I’ll take the frowns).

The last concept, Stories, pulls all of the principles together as the most effective way to persuasively pass along information. While details of stories can be dropped, the critical details remain to deliver the message.

I inadvertently proved this point on Monday. I was at a lunch where the concept of businesses in refugee communities came up. I shared that I had just read a story about refugee businesses.

In the moment I could not even remember where I read it. I forgot the actress’s name and flubbed a statistic, but the critical message was still there: the prevalence of Vietnamese nail salons began in California refugee camps as those women worked hard to survive and rebuild their lives.

Gone are my days when I can just kick back and devour every Babysitter’s Club book in the series. These days I want a book that teaches me something. This book provides interesting, valuable information without being so dense that it can’t be read on a plane or in a car (yay Holiday travel!).

And it might give you something to talk about at Holiday parties or when the Thanksgiving table convo takes an awkward turn. “Hey did you know about the Psychology of Deals or the Rule of 100?!” (great material for the family members set on hitting up Black Friday!)

In world of viral videos, this book attempts to explain our behavior. Whether you are a consumer or trying to drive behavior, the concepts presented in Contagious will appeal and provide insight into our thought process.

3 thoughts on “Bookworm – Contagious: Why Things Catch on”

Hi, I'm Libby. Welcome! I hope you enjoy my random thoughts or as my best friend in law school called them: My Rabbit Trails. Thanks for stopping by.

That’s me teaching an indoor cycle class! 😁 In 2019 I became a certified group fitness instructor and 🚴‍♀️ instructor! 📷cred @lvdoes (thanks for the inspiration and support! 😘) More about it on the blog today < link in profile >, plus setting goals and how many times it takes to say yes to a goal...
I love the Holiday season and everything about it. I seriously do. But even in all that Christmas season ❤️, I have some ba hum bug moments (maybe it’s this year’s compressed Christmas season??). This week on the blog < link in profile > I indulged in those moments, because isn’t laughter and truth the best medicine?! (Also I love how mesmerized we all are by the machine that wraps the🎄! 🤣)
Mountains + Family + 🌲= Happiest Place. December’s Top 5 is up on the blog < link in profile > for all the other things making me happy (and keeping me warm) this December! Check it out over your morning☕️ 😘
Bittersweet gratitude: my boys have graduated from riding in jogging strollers to participating in the fun run at the Turkey Trot! I’m grateful for a lot of things this year, but most recently I’m grateful for returning to the blog after a year long break and all of the amazing feedback and support. Check out the blog < link in profile > for 3 new posts about unexpected curve balls, a gratitude practice that saved our chaotic family dinners, and what I’ve been up to for the last year.
Not posed for a picture. This is honestly what I did when I realized I was standing in middle of a rocky stream high up in the mountains without another soul around except @r.carl.clt , celebrating our sixth anniversary and he happened to catch a picture #howhemakesmefeel #ithinkilikehim
This picture inspired my piece, Younger Girls: The Bane of All Women's Existence, that is featured right now on @bluntmoms ! It's one of my favorites! Check out the link in my profile to read it. #myrabbittrails #bluntmoms #boymom
Wednesday I said I never post picts of myself and then I proceeded to post 3 in a row. I guess I'm over that fear. Another fear I'm glad I got over: submitting to @scarymommy because today my writing was published on Scary Mommy! So we're celebrating! Click the link in profile to see my post!! #myrabbittrails #scarymommy #datenight Fun fact: we were last here exactly 5 years ago. I was pregnant with #1. Crazy to think where we are now.
I couldn't decide between the pict of me giving them the stink eye for refusing to sit with me for a pict or of my laughter bc this is our life. At least I have champagne and an extra peanut butter sandwich in case anyone gets hungry and music...good bluegrass music. ❤️#momlife #3boys #abmhappylife #thesemomentsmatter #myheartisfull

© (my) Rabbit Trails, 2016. Unauthorized use and/or duplication of this material without express and written permission from this site’s author and/or owner is strictly prohibited. Excerpts and links may be used, provided that full and clear credit is given to Libby Vish Carl and (my) Rabbit Trails with appropriate and specific direction to the original content.
%d bloggers like this: